Tips and Issues for Soccer Players

How to loosen up a tight ilio-band

Then work on strengthening your gluteal muscles with exercises like bridges and band X walks.

How do I improve hamstring flexibility?

This is a question I receive on a daily basis. Muscles often tighten up because your body is trying to create stability where it is lacking. For instance, you might think your hamstrings are tight, but the underlying issue could be an unstable core. So if you simply improve the flexibility of the tight muscle, you may actually be removing your body’s point of stability. As a result, your body can become more unstable, increasing your risk of injury. If you’ve been stretching your hamstring for years, and they are still tight, it is not a hamstring issue. Try these exercises instead. 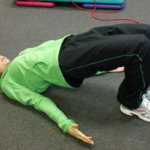 Last summer I worked with a college running back who was contemplating quitting football because of chronic hamstring injuries which started in high school and continued through his first years of college. This young man actually had well-developed hamstrings, was exceptionally strong, and had great hamstring flexibility. He had been working on hamstring strength and stretching religiously for the past 3 years. This is what he was told to do over and over and over again by his high school coach, college trainers, and strength coach.

Muscle strengths are not always the result of that muscle being tight or weak. Many times the injured muscle is functioning just fine right up until the causative event. What we need to do first is look at the mechanism of injury.

During sprinting, the hamstring lengthens across the hip as it flexes and across the knee as it extends. Eccentric hamstring strength plays a role at this point, basically decelerating the lower leg at maximum length. What we find produce greater eccentric to hamstring tension at longer muscle length.

A second mechanism of injury comes as the athlete’s lead foot makes contact and must propel the athlete forward again. Track athletes are often taught to reach and pull with the lead leg to increase stride. This is not a good idea. The hamstrings are already at maximum length, then have to perform a maximum contraction to pull the sprinter’s body over the leg. It is a concentric contraction at this point but the hamstrings are passively inefficient, meaning, they are lengthened too much to generate the appropriate force.

A third mechanism has to do with the synergistic dominance. Synergistic dominance involves one muscle overpowering the others. Hip extension is supposed to be the job of the gluteals but what often happens is the hamstrings become a dominant muscle group. This is not what they are designed to do, thus are badly over worked. So the athlete with the strong hamstrings and chronic strains can actually blame the weak gluteals.

An exercised to help correct this problem: Have the athlete in a bridge position while holding one knee in a flexed position and perform single leg bridges with the down foot in a dorsiflexed position so as to exercise the gluteal muscle more than hamstring.

ACL injuries are becoming ridiculously common among athletes from the junior high/high school levels on through the professional levels of all sports. My personal thoughts on this issue are that they are a result of the poor training programs most of these kids go through.

The act of jumping and leaving the floor is not so much the problem. But what goes up, must come down, and it’s not always pretty when it does. Landing incorrectly, with the knees in an abnormal formation, is a major cause of ACL injuries.

Landing efficiently involves all the following: Landing on the balls of the feet; knees aligned with the mid to outer foot; hips are back absorbing force; slight forward lean of the trunk with the back flat. Basically it is a good squat position!